Dr. Kathleen Toomey, the state’s public health commissioner, said the risk remains low for an outbreak in Georgia and there are no signs now that the virus is spreading within local communities.

But as health officials begin testing more people arriving in Georgia from other countries, Toomey said she expects more confirmed cases could surface.

“We expect we will ultimately find more positive cases,” Toomey said at a news conference Thursday. “The more you test, the more you find.”

Georgia’s state lab began testing for the virus Thursday, tripling the number of diagnostic tests the state has conducted so far, Toomey said.

She did not give a specific count of how many tests were done before Thursday but said it was a “small number.”

The state now has more than 2,500 diagnostic test kits on hand from the federal government capable of completing 1.5 million individual tests, Kemp said.

Anyone in the state will be able to receive testing regardless of the status of their health insurance, Toomey said.

“If you are uninsured, we will provide the test for free,” she said.

Georgia joined a growing list of states this week with confirmed cases of coronavirus, which is thought to spread largely by “respiratory droplets” when someone coughs or sneezes after symptoms are present, according to the federal Centers for Disease Control and Prevention.

Symptoms appear within 14 days of contraction and include fever, coughing and shortness of breath.

Two infected Georgians, a father and his son, have been quarantined with family at their home in Fulton County and showed mild symptoms, according to officials.

The father tested positive for the virus after arriving via Hartsfield-Jackson Atlanta International Airport last week from a trip to Milan, Italy, where the outbreak has infected thousands of cases and led to more than 100 deaths.

Italy is one of a few countries – along with China, Iran and South Korea – where travel restrictions and screening have been ramped up at the Atlanta airport in recent days, said Hartsfield-Jackson’s general manager, John Selden.

The airport, along with federal health officials, has instituted multi-layered testing for travelers arriving from China and Iran, Selden said. So far, only one person has been sent to Emory University Hospital in Atlanta for additional screening, who tested negative for the virus.

The update Thursday afternoon from state officials came shortly after Congress approved $8.3 billion in federal funding for coronavirus control and prevention. The spending package includes money to develop a vaccine for the as-yet untreatable disease.

It also comes ahead of President Donald Trump’s scheduled visit to the CDC on Friday.

Kemp, who last week convened an expert group to handle coronavirus prevention and response activities, said more than 100 cases have been confirmed in the U.S. to date.

He urged “common-sense practices” like hand washing, covering one’s mouth when sneezing or coughing and avoiding sick persons when possible.

“This is still no time for Georgians to panic,” the governor said. 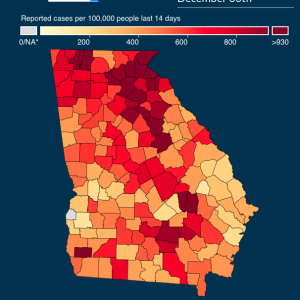 New from DPH: Return to School or Childcare Guidance After COVID-19 Illness or Exposure